Backspin is Important to Your Basketball Free Throw! A SOLIDWORKS Simulation Study

A free throw in basketball is a shot about precision and consistency. Error margins are tight, so players implement techniques to improve their chances. One vital technique is to put backspin on the ball. In this article, we will run a motion and aerodynamic analysis using SOLIDWORKS Motion and  SOLIDWORKS Flow Simulation  to look at why backspin is important by comparing it to a shot without spin. We will look at two important factors along the way:

Using SOLIDWORKS, we can accurately position the ball at the free-throw line (figure 1) and reliably shoot a free throw the same way every time, varying only one parameter at a time.  This way, we can answer specific questions without too many confounding variables. In this test, we varied the speed of the basketball while holding the angle constant, and we tested with 3 RPS (revolutions per second) of spin (figure 2). Then we also did the same test without spin. 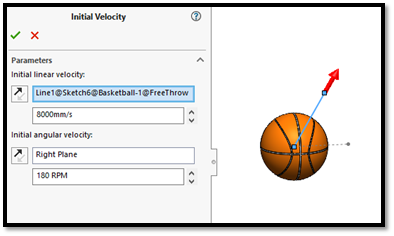 Figure 2 - Initial Velocity and Rotation are setup in SOLIDWORKS Motion

We included drag forces on the ball, which will affect its natural parabolic path and give us more accurate results. Figure 3 shows an example equation of the Y-component of the drag force.

Springs were included on the hoop (figure 4) to mimic the deflection that occurs when the basketball hits the front of the rim.

With this setup in mind, we are now ready to run our tests.

One of the most telling results we got was when we shot the ball at around 7.78 m/s and it hit the front of the rim. See if you can spot the difference in performance between the exact same shot without spin (left) and with spin (right) in animation shown below.

The backspin slows the ball down when it contacts the hoop. We tested with many speeds and summarized the results in Figure 6. 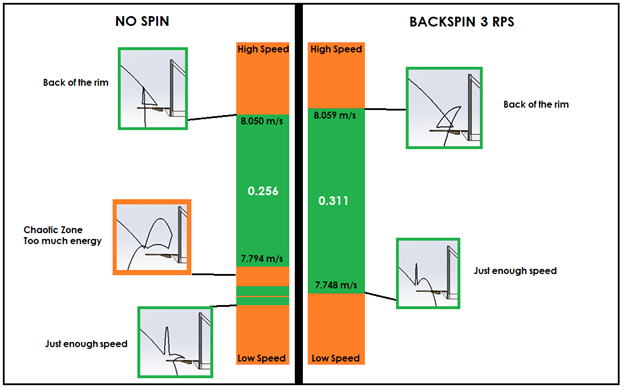 As you can see in this figure, we can potentially make shots by undershooting with no spin, but there is an unreliable zone where the ball has too much energy and tends to bounce out. If we look at the reliable region, our margin for error looks a lot bigger when the spin is added. See the comparison of these regions in Figure 7. 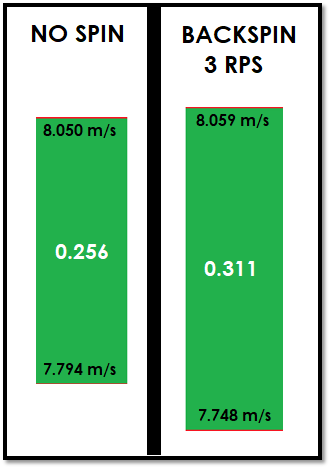 Figure 7 - Side-by-side comparison of shot margin. More than 20% larger when spin is added

According to this test, adding backspin will increase our margin of error by a little more than 20%.

Another factor that can make a big difference between a shot without spin versus one with spin is aerodynamics. Since basketball shots must be both consistent and precise, the knuckleball effect (as seen in baseball) can influence the error margins significantly on a shot with no spin. Figure 8 shows the same two shots going through the air with lift forces plotted beneath them.

The lift force on the shot with spin (right) has a stable average lift force which swings up and down roughly in-sync with the rotation of the ball.

In contrast, the average lift force on the shot with no spin (left) shifts upward in this animation.

This upward shift is difficult to predict and could have shifted downward or even not at all if the initial conditions had been slightly different. The shift depends on a few factors, but primarily in this case, the position of the seams has the biggest impact.

The animation below shows how a slight change of angle can have a big impact on the lift force direction.

But what does this mean for our shot? If the lift force points up in the beginning of our shot and then switches in the middle, it pulls the shot off away from its average path (figure 10).

Figure 10 - Knuckleball effect on the flight path of the ball.  Average path shown in blue.

Compare this to a shot with the average lift being relatively constant and where the fluctuations quickly cancel themselves out along the way (figure 11).

If we zoom in and look at how far away from the average path these shots get, the difference is clear (figure 12). 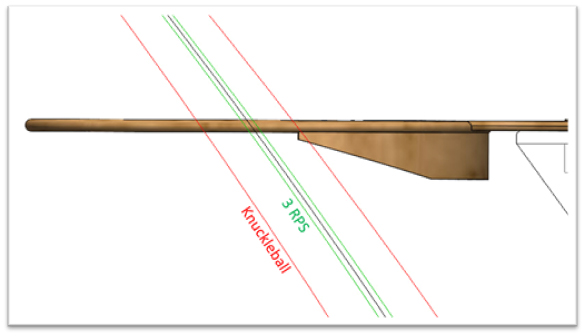 And the effect this has on our error margins creates a compelling argument for adding spin to your free throws (figure 13). 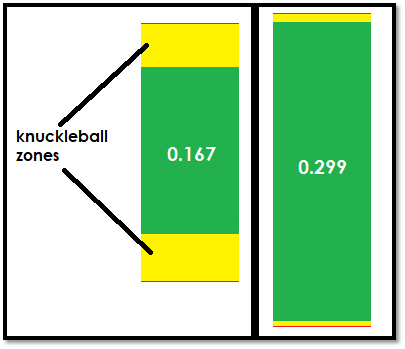 Looking at the consistent zones, this represents almost an 80% improvement.

Setting up virtual experiments in SOLIDWORKS Motion and SOLIDWORKS Flow Simulation is often a lot easier, faster, and more consistent than setting up real physical experiments or prototypes. Fortunately, in basketball, there are a lot of “experimenters” already out there on the field to test these theories and their overall conclusion is the same: backspin helps.

To learn more about how SOLIDWORKS Motion or SOLIDWORKS Flow Simulation can help you on running your virtual experiments, please contact our support or schedule a session with one of our engineers.