3DEXPERIENCE World 2021 Day 1 started with the commute from my kitchen to my desk and it was a horribly long walk with a chance of snow. I settled in with a giant cup of caffeine but I found that was unnecessary thanks to the upbeat, pre-show music.

Some of those in the live-stream chat shared my appreciation for a virtual conference:

"Biggest benefit to virtual conf? I was able to go to bed at 7:30 pm last night due to no Hotel Lobby Bar to get stuck at until 2 am”

The general session opened with an engineer working at his computer. Frustratingly scratching his head with a half-finished cold brew on his desk, searching for a source of inspiration. Gian Paolo Bassi, CEO of Dassault Systèmes, messaged him asking how his project was going.

It was not. I can empathize.

Gian Paolo Bassi suggested that the engineer check out 3DEXPERIENCE World 2021 for inspiration and he was magically transported to a surreal environment where he watched mechanical creations form before him, only to be teleported back to his desk. Now with the inspiration he needed, he was ready to work.

MC Tracey B. Wilson welcomed guests to 3DEXPERIENCE World 2021 Day 1 and introduced Gian Paolo Bassi who joined us from "space". In a virtual conference where you can join from anywhere, why would you not choose space? 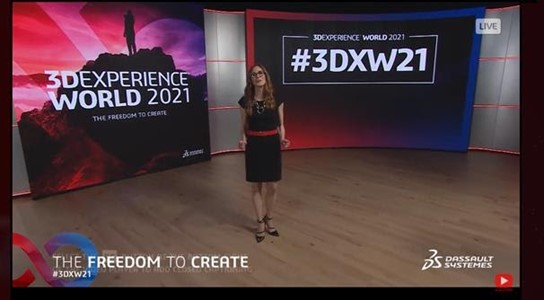 “So it is not real.” Tracey B. Wilson stated regrettably in reference to his space theme. Bassi insisted that it “feels very real.” 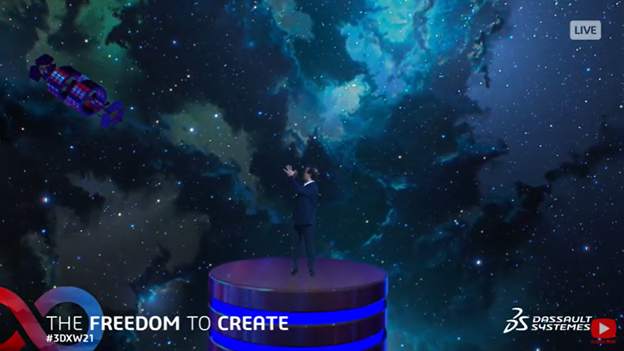 2020 accelerated businesses towards a virtual, cloud-based platform because physical presence was not possible. Gian Paolo Bassi states, “And it had so many positive outcomes.”

This became the theme of the general session, with customer stories mixed in throughout the day discussing how they adjusted to working virtually. Something we thought would be a temporary solution is becoming the “new normal” because of the convenience and efficiency of being able to work from anywhere.

Gian Paolo Bassi turns it over to Bernard Charlès, Vice Chairman of the Board & CEO, to discuss the collaboration between “Life, Nature, and Product.” 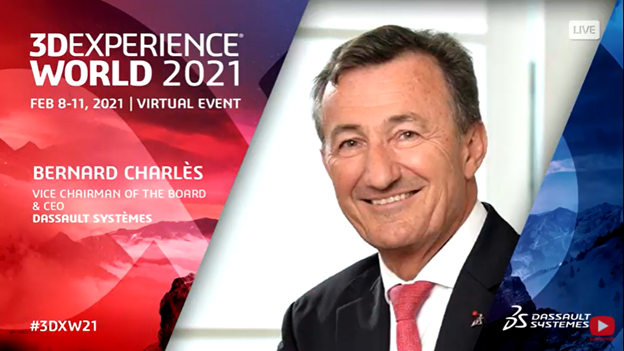 Bernard Charlès discussed how we are all explorers who desire the freedom to create. Some cool clips were presented showing that we are surrounded by technology created with Dassault Systèmes. 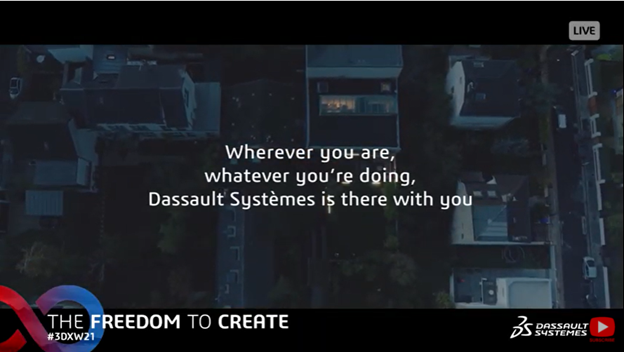 His presentation ended with music that sounded like it was straight out of a Marvel movie, making his impactful words resonate in my techy heart, “For education, to turn our future generation into innovators.”

Next, a group of students was introduced who used the 3DEXPERIENCE platform to collaborate across the world. “Anytime, anywhere, and from any device.” They won Dassault Systèmes’ sustainability challenge, crowd-funded, and opened a shop to sell their environmentally friendly hoverboards. I want one! 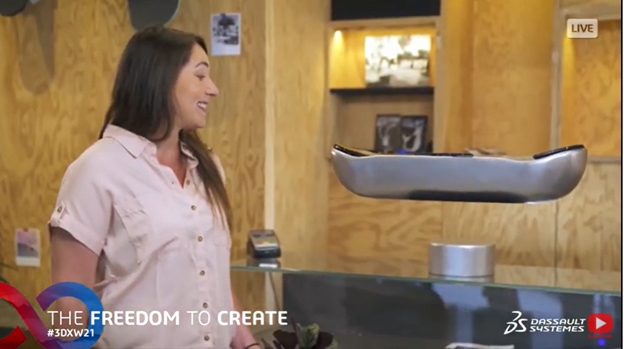 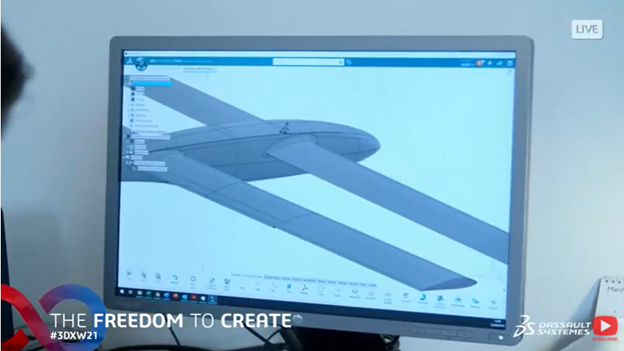 Following their story was XSun, a company that uses the 3DEXPERIENCE platform to create autonomous aircraft drones that operate on solar energy.

Bernard Charlès signed off promising that “we will be together in 2022.”

The theme of 3DEXPERIENCE World 2021 Day 1 is “freedom to create,” and this is shown in yet another customer story told by Sam Miller, founder, and CEO of Proteus Motion who was able to take their fitness equipment company remote amid the pandemic. 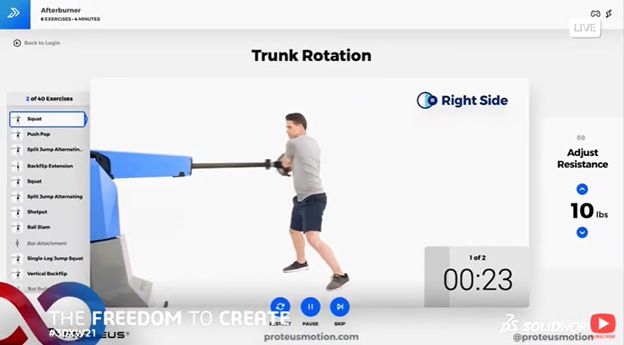 We also heard from Tiniko, who used cloud-based collaboration to run their simulation studies on their medical implants more efficiently. 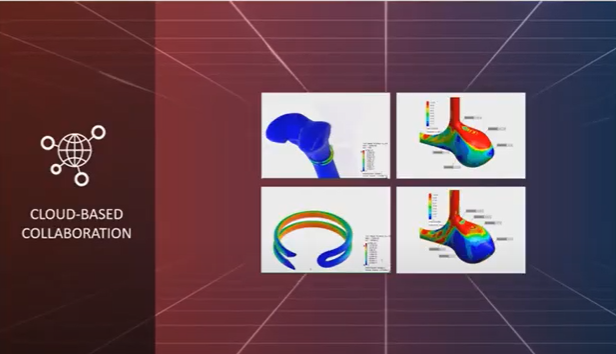 Bassi’s introduction of 3DEXPERIENCE SOLIDWORKS for Students made me wish that this was available back when I was a student. I mean I am technically still a student of life, right? :) 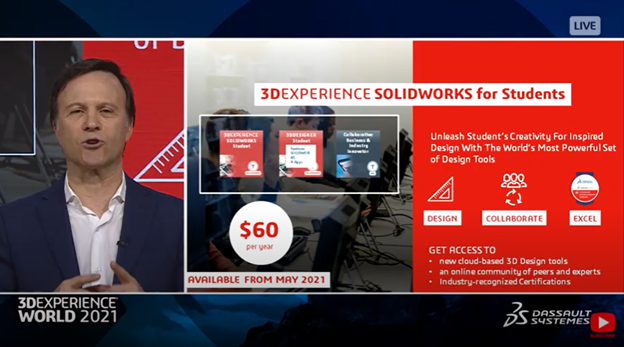 Next, we learned about robots that go where no one has gone before thanks to Jim Keravala, CEO of OFFWORLD AI. Humans can collaborate using the 3DEXPERIENCE Platform, and Jim Kervala explained how he is building robots that collaborate with each other to explore “off-world” locations. 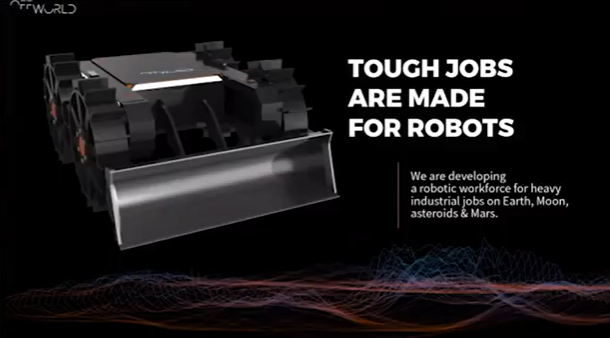 Duncan Wardle, former Head of Innovation and Creativity at Disney instructed us to "think differently" and shared brain states from Disney through an awesome presentation consisting of incredible drawings.

"This has been one of the best presentations ever."

I would have to agree! On the theme of “thinking differently” and adjusting to current times, the organizers of 3DEXPERIENCE World had to think differently and adjust so this event could be done entirely virtually. As MC Tracey B. Wilson states, “We are excited that many more people are able to join us virtually than we would ever be able to fit in an event hall.”