Altair SimSolid is a structural simulation that runs its calculation based on original CAD geometry. The geometry does not need simplification like with traditional structural analysis packages because SimSolid does not use a mesh to run its calculations.

In addition to static structural analyses, SimSolid can run other analysis types such as modal, dynamic, non-linear, and thermal. SimSolid is rich with connections and contacts often needed when working with large assemblies like bonding, sliding connections, separating connections, and more sophisticated connections like welds and adhesive connections. In this blog, we will review some popular connections available in SimSolid.

Common Challenges with Creating Connections in an Analysis

Establishing connections is one of the most important aspects of setting up an analysis in most simulation software. Depending on the complexity of the model, it can also be a time-consuming step of the analysis setup process because of the need to inspect all contacts individually as a best practice.

Another aspect of setting up connections is issues related to model geometry. Looking at the picture below, the model appears to be in proper contact, but in reality, it could have very small gaps or overlaps. We would need to zoom in quite a bit to detect these types of issues. If missed, these issues could throw off your setup or cause errors in your simulation down the line. Normally, issues like this need to be addressed in the native CAD software before proceeding with the Simulation.

So now that we have an idea of what some of the challenges are when working with contacts, let’s take a look at what working with connections in SimSolid could look like.

The overall benefit of working with SimSolid is that we can help alleviate some of the challenges and tedium of setting up traditional connections. A utility we find exceptionally useful is automatic connections.

When importing your model into SimSolid, we are prompted to detect and establish contacts automatically. This utility has the capability of creating thousands of connections in a matter of minutes.

Another useful capability of SimSolid is that it can resolve relatively small gaps and overlaps. In the picture below, we can see examples of how different overlaps and gaps can be handled using SimSolid. 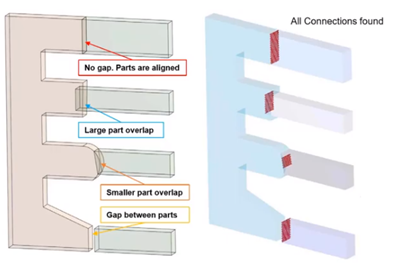 For penetrating bodies, it will project to where the interference will intersect and generate contacts at those locations. For gaps like on the bottom example, the tool will decide as to what side of the gap to apply the contact to.

Overall, SimSolid will tend to accept imported geometry as-is without the need for tedious cleanup and repairs. This is true for most of the smaller gaps and overlap issues typically encountered with CAD models and is another impressive aspect of this tool.

If you do have a model with extreme gaps and overlaps relative to the scale of the model or design, it’s still best practice to resolve these instances.

Before we look at a demonstration of SimSolid, you should first know the basic types of contact conditions that can be created.

In the video clip below, we import a STEP file and review how to create and work with these contact types and capabilities.

Bolted connections in SimSolid require the imported model geometry to include the actual bolts and fastener geometry from the CAD model. Bolted connections are not treated as virtual components, and since SimSolid does not require meshing, the extra details included with the fasteners will not heavily set back your computer’s calculation resources. 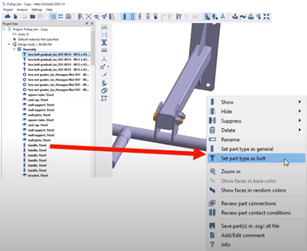 On the contrary, you will actually increase the accuracy of your structural response of the model. Because of this, when assigning bolted connections, the geometry  has  to make sense and there has to be appropriate geometry for the correct contact for the head and of the shank contacting surfaces of the bolts. The flexibility of specifying accurate bolt definitions in SimSolid is that we can apply force conditions to the bolt with traditional force loads in the study, or you can specify specific bolt or nut tightening conditions.

Weld connections are specialized connections used to define specific weld properties in an analysis. When applying welded connections, the assumption in SimSolid is that the weld is perfectly created and perfectly bonded. 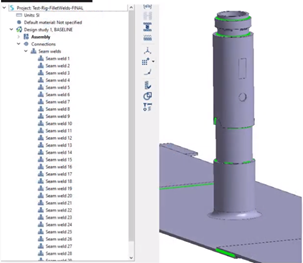 Virtual connectors are a good alternative for transferring loads from one component to another when the components are missing in the model. The downside to this is that results will not be visible on these virtualized connectors and anything that is specified as virtual in the calculation will behave perfectly rigid during the structural response of the model.

Another downside is that virtual connectors may cause heightened or localized stress connections around the areas of the joining components.

One of the easiest virtual connections to use is virtual pins. Virtual pins will connect coaxial cylindrical faces in your model. They can be specified as either rotating, acting as a hinge, or bonded locking the components that are connected in place.

Virtual rivets connect multiple stacked parts with a rivet of a specified diameter by picking the location on a part face in the analysis space. The rivet will be assumed to pass through the stack components.

The general virtual connector will connect specified components rigidly between either faces or specified spots on the model as if a rigid component or epoxy connecting the parts.

The remote mass capability will connect the specified face or spot on the model to a hypothetical or virtual model of a specified mass. This is useful to help represent missing geometry in your analysis.

You can review all of these connection types in the video below.

Adhesive connections in SimSolid must be modeled with a deliberate gap in between entities that will be connected. This is used to figure out the thickness of the adhesive in the software. If the adhesive's faces are coinciding or touching, SimSolid will detect touching faces and display a warning message.

There are two ways to establish adhesive connections in SimSolid: converting an existing contact or by using reference geometry.

To convert an existing contact to an adhesive, right mouse click on the connection you want and select ‘apply adhesive’ to the context menu. There will then be a popup window to specify the material of the adhesive to finish the definition. Applying an adhesive in this way will apply the adhesive to the full contacting region.

If you would like to have more control as to where you apply the adhesive, you must create an adhesive condition using the existing reference geometry method. For this, we have to make sure that we have modeled a tubular or cylindrical geometry that represents the adhesive as if it were piped in the desired location of the model. That will determine the thickness of the adhesive surface area.

This tubular geometry must also interface a small amount with the two faces you want to connect. We can see an example of this below:

SimSolid will then extract the centerline of the cylindrical tube to create the adhesive region. The thickness of the adhesive will be determined by the spacing between the two parts.

That wraps up Altair SimSolid and working with contacts. To learn more about SimSolid or any other Altair product, please contact us.

Introduction to Altair Inspire Cast: Setting up a Simulation