What Causes Preview/View in Explorer to Fail?

The preview window in Explorer and the View option in PDM History are both often used when reviewing files because SOLIDWORKS eDrawings is not associated properly to preview. You may be presented with the error below or with a blank display.

This is indicating that the location for the needed viewer tool is not valid for the right application. In some cases, it’s pointing to an older viewer that cannot preview the newer versions of the files. In either event, you need to have it corrected inside of the SOLIDWORKS PDM Administration tool.

Fixing the Preview/View in Explorer

How to fix this from your workstation

These settings are best set at the group level but sometimes require individual changes. The PDM Administrator will need to locate the viewer in the file locations or search your C drive for emodelviewer.exe.

You’ll want to be sure to attach to the viewer that is the same major release version as your SOLIDWORKS or associated files are saved into. When you browse to find the EModelView.exe you can use the Icons view which will show you the year version of the application.

The PDM Admin will now need to access the SOLIDWORKS PDM Administration Tool. Once logged into the vault in question you will need to right mouse select or double-click the Group who is having issues and go to Settings… 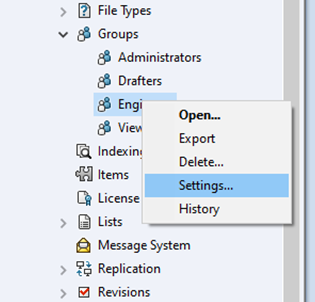 Now you can set the viewer. You might find your group or user's properties are blank.

No worries! Here are the two default extension lists and their viewers. Use the Add button and add the following. Remember to verify the .exe exists on the machine in the paths provided.

Your Group Setting for the viewer will look like the image below.

This should allow them to preview from Explorer in PDM and View from PDM History.

Jerald Staley is an Elite AE with over 15 years of experience as a SOLIDWORKS Instructor, Application Engineer, and Technical Support Lead first at DASI now GoEngineer. Jerald studied at the University of Michigan and Mott Community College where he earned his degree in Engineering Design and Mechanical Engineering.

View all posts by Jerald Staley