FeatureWorks is an integrated geometry recognition module that allows for files imported to SOLIDWORKS from other CAD systems (Inventor, Pro/Engineer, CATIA, etc.) to be given a rudimentary feature history where they otherwise would be left simply as an “imported” body. This also has applications when attempting to collaborate with other SOLIDWORKS users who operate on previous versions of SOLIDWORKS where newer version files are not able to be opened and edited within the past version of SOLIDWORKS.

Allowing FeatureWorks to create a feature tree enables a SOLIDWORKS user to make parametric model edits that are routine with SOLIDWORKS. While the FeatureWorks module may not recognize complex geometry or create the exact feature tree a user desires it is still a powerful tool in modifying designs.

FeatureWorks comes with two main modes; “Automatic” and “Interactive.” The difference between automatic and interactive modes is not only in the behavior but also in the complexity of geometry that can be recognized. As seen in the lists below, interactive mode allows sweep, loft, and shell feature recognition where automatic mode does not. Alternatively, automatic mode, through lack of required input from the user has the advantage of speed. 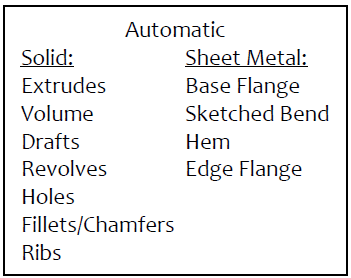 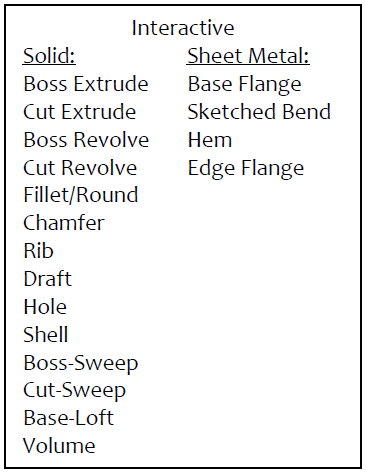 The differences in permitted features aside, the ability of interactive mode to allow a user to determine the build order of recognized features allows it to succeed where automatic mode may otherwise fail.

The examples provided in this document will show the difference in outcomes of automatic recognition versus interactive recognition modes to show the abilities and limitations of each.

In this example, a body is imported from an .IGES neutral file. ‘Import Diagnostics’ is triggered by opening a non-native file format. It is recommended to always run import diagnostics to ensure the model is clean geometrically but will not be covered here. Following this FeatureWorks recognition software is immediately prompted to begin. Replying ‘Yes’ begins the process. 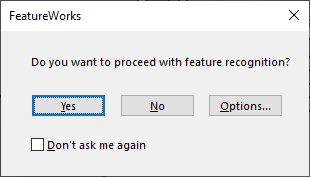 Figure 1: Examples of the import diagnostics and feature recognition prompts

In the property dialog that appears on the left-hand side of the graphics window, shown in Figure 2a, ‘Automatic’ mode is selected. In this case, only solid features are selected for recognition as the model is not thin-walled and would not be represented by sheet metal very well. With the options for ‘Extrudes’, ‘Drafts’, ‘Revolves’, ‘Holes’, ‘Fillets/Chamfers’, and ‘Ribs’ turned on all that is required to proceed is to press the blue right-arrow at the top of the dialog. 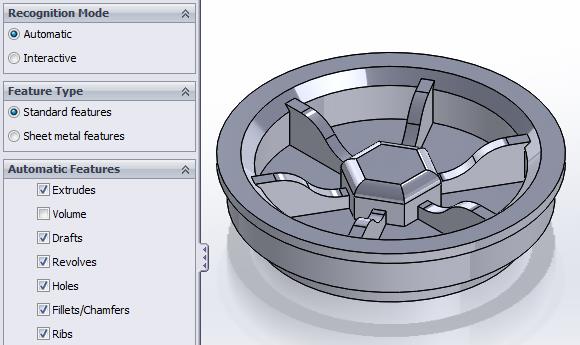 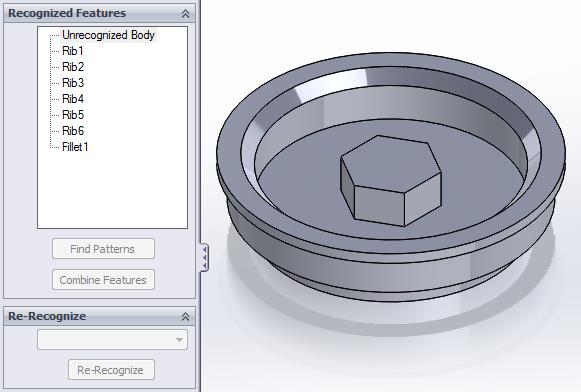 As illustrated above in Figure 2b, automatic mode runs the risk of not recognizing parts of an imported body. While these portions of the imported body may seem simple, without assistance from a user they are left unrecognized and unsolved by the software.

In this example, the same body is imported from an .IGES neutral file. ‘Import Diagnostics’ is triggered and ignored and FeatureWorks is again prompted and activated.

In the property dialog that appears on the left-hand side of the graphics window ‘Interactive’ mode is selected. In this case, sheet metal features are again ignored but now the settings have changed to allow for only one type of feature to be recognized at a time. In this way, the user specifies a particular feature type to recognize and manually selects faces to attempt the recognition on.

Using the same imported body as in the automatic recognition example the process would proceed like this:

The process is now complete and the entire list of recognized features is listed. Accepting the FeatureWorks command will allow the program to make the final feature tree build of the model; building bottom-up.

The take away from this is that imported, “dumb,” solids can be made parametric and interactive once again with a small amount of upfront user input. The key to the FeatureWorks Interactive recognition mode is to keep flexible with the recognition order; the goal is a workable feature tree, not a perfect feature tree. 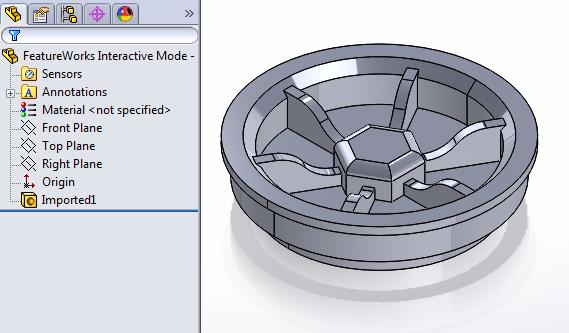 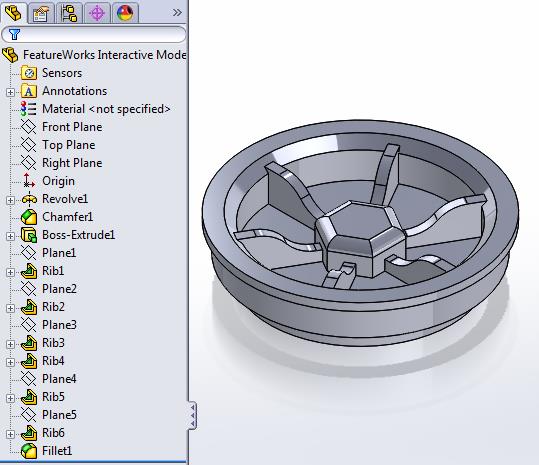